Mobile: 082 900 3867
Email: This email address is being protected from spambots. You need JavaScript enabled to view it.

BA, LLB (University of the Witwatersrand) 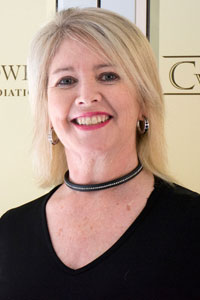 Ceri (pronounced “Kerry”) Von Ludwig has a BA LLB (1985) from Wits, was admitted as an attorney in 1988 and has practised full-time ever since.

She specialised for many years in High Court litigation in various fields, always leaning heavily towards Family Law, and went on to study and focus on Employment Law for some years, developing a skill set which has enhanced her reputation as a sought after Family Law practitioner.

In 2004, Ceri reverted to her primary field of interest, Family Law, when she became a Director at Bowman Gilfillan Inc. She has practised Family Law exclusively ever since and has become widely accepted as one of the top family lawyers in South Africa.

The opportunity to establish her own practice, focusing exclusively on Family Law was too exciting to resist, and Ceri has been practising for her own account since 1 October 2011.

Ceri’s primary focus is on divorce, but she works extensively in all fields of Family Law.

Ceri is an experienced divorce mediator and has participated in regular workshops on mediation as presenter and attendee. She strives to resolve as many Family Law matters as possible using the amicable and cost effective mediation route. She served on the committee of the South African Association of Mediators and is a past co-Chair.  She also proudly serves on the committee of the Gauteng Family Law Form (GFLF).

Our practice has a sensible commercial approach to the proprietary aspects of all cases and this, coupled with the personable and approachable nature of Ceri and her team, has led to excellent success rate and high levels of client satisfaction.

The practice takes on more than its prerequisite pro bono cases, which are carefully chosen to ensure fairness. We also strive to mentor young and aspiring lawyers and offer as many opportunities for students and graduates to be involved with us as possible.

Ceri has served as a Small Claims Court Commissioner and on various disciplinary panels and committees in equestrian sport and animal welfare. Even in her early days of practice she was a marker for the “Court Paper” section of the Attorney’s Admission Exam and went on to serve as Moderator and Oral Examiner for all papers for many years.

Ceri has appeared and continues to appear regularly on television and radio advising on numerous aspects of Family Law, and particularly enjoys this way of reaching out to people.